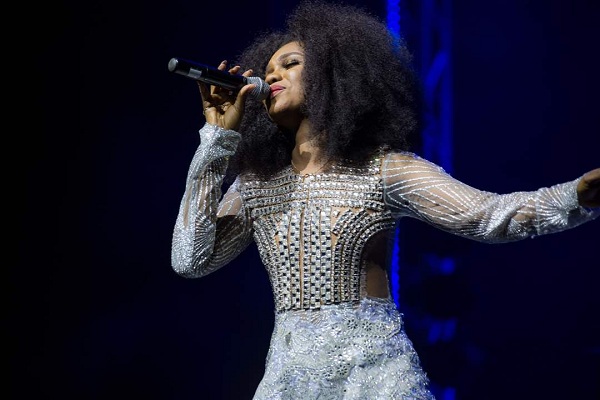 It was a beautiful night with all the stars from Africa especially Nigeria on one stage all in the name of celebrating Zylofon Media signee Becca as she celebrated her 10th anniversary in a concert dubbed Becca Unveiled.

The show down indeed has been touted as one of the best in recent times in Ghana because of the array of stars that graced the occasion to celebrate one of the recognizable voices in Ghanaian music Rebecca Akosua Acheampomaa Acheampong aka Becca.

Among the top artistes from Nigeria included Wizkid, Patoranking, Mr Eazi, M.I , Ice Prince, Niniola, DJ Spinal and Wande Coal. They all put up fantastic performances and the audience could not have enough of them since they kept screaming for more songs.

They could only do few songs because the day was to celebrate Becca and the artistes did that in a grand style at the national theatre.

As if the appearance of the Nigerian artistes was not enough, Zylofon Media and Becca also increased the speed of the fun with all the big names in Ghana`s music industry and it was a delight to see these stars outdo each other on one night.

The crowd as well enjoyed some comedy on the night from DKB & Comedian Hogan. The performers also congratulated Becca including those who could not get the opportunity to perform because of time constraints.

Ghana really came out to celebrate Becca alongside Zylofon Media with a massive crowd at the national theatre last Saturday.

The queen of the night Becca appearing in different costumes throughout her performance mesmerized the audience with her soothing voice and her feminine possessions. She performed all her hit songs including the massive collaborations she has done with all the big stars in the world of music.

With this feat achieved over the weekend, Zylofon Media would like to appreciate all and sundry who supported the concert one way or the other. We are overwhelmed with the support we have gotten from the media before and after the event with positive reviews all over the media space including social media.

Zylofon Media is also grateful to all the artistes who came to support Becca on the night when it mattered most in her career and it is our prayer that the support continues to flow in from all angles.

We are also on this note commending the fans and all the patrons who came to have fun with a call that if something went a way they did not like, we will take their comments and work on it next time.

Once again, Congratulations to BECCA!!!