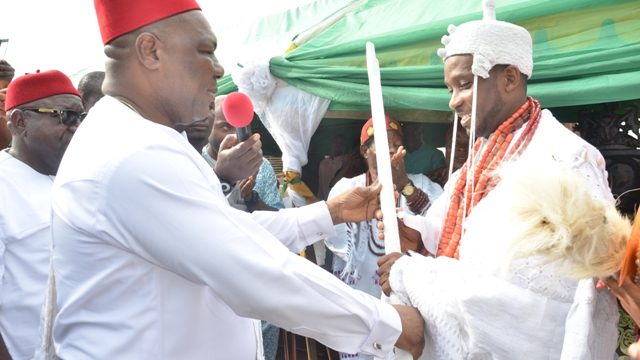 The festival is ongoing at the Obi’s Palace in Ugboba Kingdom with several traditional activities to make the celebration colourful and memorable.

His Royal Majesty celebrates the new Yam festival followed by gunshots to invite his kindred (Ndi Ogbe-Obi) for the Iwaji entertainment proper by 10:00 am, and the second gunshot to invite Ndi Ikpala (Red cap chiefs) for entertainment ensues by 12noon.

Other activities include the third gunshot to welcome in-laws, friends and well-wishers of Ugboba kingdom with the fourth gunshot for traditional dance by Ndi-Ikpelime as well as general entertainment.

Ugboba is a town in Aniocha North Local Government Area, Delta State, Nigeria. It is bordered by Ohordua, Ubulubu, Obompka, Ukwu-Nzu and Ugbodu in the north, northeast, east, southeast and south respectively. The community is currently governed by its 10th monarch and highly cerebral HRM Obi Ezedimbu Nkebakwu III, who was given a staff of office by the Delta State Government on 2 June 2016.