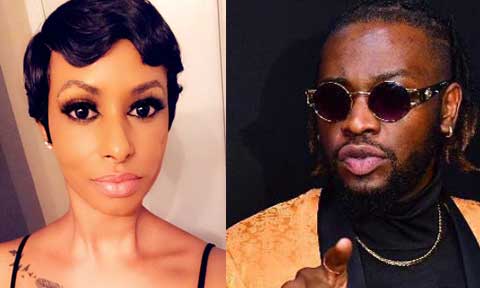 Dallas based Mauritanian beauty, Layla Amani has taken to Twitter to call BBNaija Teddy A out fire being a deadbeat dad. Hell, they say hath no fury as a woman scorned! an ongoing drama on Twitter has left many awed and it’s from the camp of BBNaija Teddy A’s baby mama.

In a series of tweets, she took to ranting, vehemently pissed at the singer for not taking care of his child and giving the public a different opinion

Layla Amani who has been giving him her support and was his biggest fan right from when he was in the BBNaija 2018 reality show, has come out to releasing fire and brimstone on the singer

From all indication, she has been hiding facts from the public to save him but she would have none of it anymore, as Teddy A seems to have gone too far this time.

Claiming to have been taking care of their child alone for five years, she has threatened to spill more juice to the public, including telling the world who “Chief Tope’ is if he doesn’t play ball

“Before you give money to fans left and right take of your kid first smdh. Ain’t playing with you ni**a I am allergic to bu*l*h*t. Fear what you don’t know

I got so much prove on your ass so don’t Bleep with me before I scatter your fake life mumu. I’m trying to keep my cool but I guess u like my wahala. Oya Hurricane Layla on the way to scatter everything with facts.

Whatever ppl thing of me don’t matter I’m tired of taking care of my son while you’re there having fun Nd living the fake life, fake everything. I keep warning you but your mumu self Won’t listen, arrogance will kill you

I have time today. How many time I warned your a**. U can lie don’t them but not me cuz you know the secrets I got on you

Why this mother f*c*e*s thing is ok to let a mother take care of their pikin while u here having fun, nah I’m not one of those BM. You are so manipulative only a mumu can’t see it

I go with the flow, you want wahala I’ll serve if you want peace u know what to do. For 5 yrs I have been taking of my son the first you send him money was on his bday, so don’t tell I didn’t try o

I call him to send him messages to keep the peace but I guess he likes to Bleep with me #imthewrongbabymomtoplaywith. Your son should be your priority *i*g*.

They don’t know the way I know you so stop b*l**h*t Nd be a good father to your son and stop deceiving yourself biko, Nobody hacked my account o”