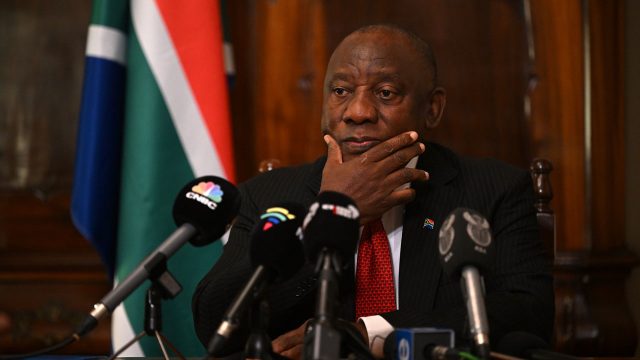 Pressure has mounted on the president after a special panel probing a burglary scandal at Ramaphosa’s farm concluded that there was enough evidence to warrant a parliamentary debate on whether he should be removed.

The report established that “the president may have committed… serious violations” of parts of the constitution and anti-corruption laws.

Coming two weeks before the ANC holds its crucial conference — where it is due to elect new leadership — the report has dealt a serious blow to Ramaphosa’s re-election bid.

The president has also cancelled a scheduled question-and-answer session in parliament Thursday afternoon, his office said.

The president’s written request to cancel said that “implications for the stability of the country required that the President take the time to carefully consider the contents of the report and the next course of action to be taken”, parliamentary authorities said.

The three-person panel set up in September to probe the alleged cover-up of a theft at Ramaphosa’s farmhouse said that the information it gathered shows that Ramaphosa possibly committed serious violations and misconduct.

These include not reporting the theft directly to the police, acting in a way inconsistent with holding office and exposing himself to a clash between his official responsibilities and his private business.

Ramaphosa reiterated his denial of any wrongdoing and that he is “giving consideration to the report and an announcement will be made in due course”.

Deputy President David Mabuza, who was scheduled to address an international AIDS day commemoration event, has also cancelled his appearance and sent the health minister in his place.

The opposition has called on Ramaphosa to leave office immediately.