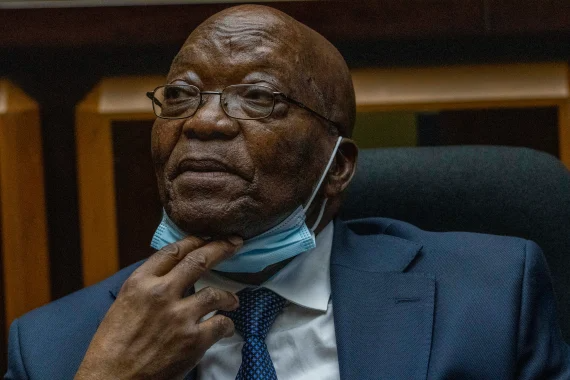 Former South African President Jacob Zuma and his legal team should immediately drop their private criminal prosecution against Karyn Maughan, a reporter with the privately owned News24 site, and allow the press to report on court proceedings without intimidation or fear of reprisal, the Committee to Protect Journalists said Tuesday.

On 6 September, Mr Zuma’s legal team notified Ms Maughan in a court summons that it had filed criminal charges against her in connection to her 10 August, 2021 News24 report on Mr Zuma’s medical condition, according to multiple news reports, a statement by local press freedom group South African Editors’ Forum, as well as Ms Maughan and News24 editor-in-chief Adriaan Basson, who both spoke to CPJ via messaging app.

South Africa’s Criminal Procedure Act allows a person directly affected by a crime to bring a private criminal prosecution against an individual if the National Prosecuting Authority (NPA) declines to do so. Zuma’s legal team applied to the NPA for permission to prosecute after the authority cited lack of evidence in its decision not to take up the case. Maughan is scheduled to appear in court on October 10.

“Former South African President Jacob Zuma should drop his private prosecution of News24 journalist Karyn Maughan and cease efforts to intimidate the press,” said Muthoki Mumo, CPJ’s sub-Saharan Africa representative in Nairobi. “Maughan has every right to report on a matter of public interest, and this attempt to penalize her work could have serious repercussions for freedom of the press in South Africa.”

According to news reports and the summons, Mr Zuma’s legal team charged Ms Maughan and local prosecutor Billy Downer with violating Section 41(6)(b) of the National Prosecuting Authority Act, which prohibits disclosure of “contents of any book or document or any other item in the possession of the prosecuting authority.” Mr Zuma’s lawyers allege that Mr Downer leaked a confidential medical letter on Mr Zuma’s health to Ms Maughan, which the journalist used in her article, reports said. If found guilty, the penalty ranges from a fine to up to 15 years in jail.

(Ms Maughan has also been charged with being an accomplice to the breach of another section of the same act, which carries additional penalties, according to the summons.)

It has been widely reported that the documents allegedly leaked to Ms Maughan were also submitted to court in a corruption case against Mr Zuma, making them public information.

“There is absolutely nothing strange or wrong about being given access to court papers that are about to be filed at court, for public viewing. Court papers are inherently public documents,” Mr Basson told South African newspaper The Citizen.

Mr Basson told CPJ that the private prosecution is clearly “an agenda aimed at intimidating not only our journalists but others as well” who have been reporting on Zuma’s court cases. Zuma, who was president from 2009 to 2018, previously tried to have Downer removed from prosecuting a corruption case against him. The former president was sentenced to 15 months in prison last year for contempt of court over his refusal to testify before a corruption commission. He was granted medical parole after two months, which a High Court ruled unlawful; Mr Zumauma is now appealing that ruling. “Maughan will continue to report on Mr Zuma’s criminal cases and we will defend her to the hilt,” Basson added.

Reached by CPJ via messaging app, Mr Zuma’s spokesperson Mzwanele Manyi, repeated the claim that Maughan had broken the law. “We are not here from our perspective dealing with just a journalist, but dealing with any person that receives information irregularly and if that person who receives information irregularly happens to be Karyn Maughan, a journalist, then it is just a coincidence,” he said. Manyi said his team supports media freedom but “you can’t be saying media freedom when you are only referring to Karyn.”

Mr Zuma’s daughter, Duduzile Zuma-Sambudla, tweeted on 7 September that Ms Maughan’s prosecution “Will Be A Lesson” for journalists.