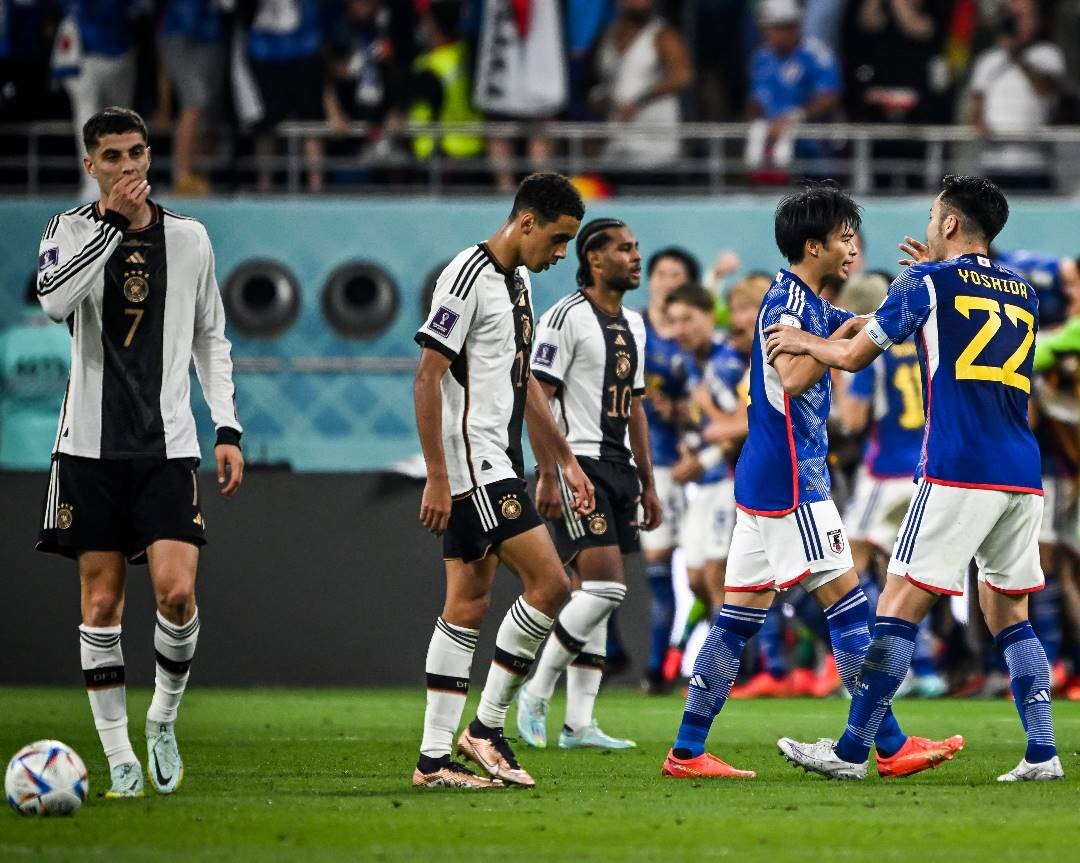 The unpredictable nature of the Qatar 2022 World Cup continued on Wednesday as Japan scored two late goals to record a 2-1 victory over four-time world champions Germany in the opening match of Group E.

Ilkay Gundogan’s 33rd-minute penalty gave Germany the lead in the Group E contest and they held on to the slim until the 75th minute, when the Blue Samurai turned the tables.

Substitute, Ritsu Doan got the equaliser for Japan in the 75th minute before Takuma Asano won it eight minutes later.

Having started on this disappointing note, Germany, who were eliminated in the group stage of the 2018 World Cup, will be desperately seeking to bounce back when they take on Spain on Sunday, while Japan are next in action against Costa Rica on the same day.

Japan gave a glimpse of what to expect when they had the ball in the back of the net in the eighth minute of the contest.

Daizen Maeda tapped the ball home from close range, but the goal was rightly chalked off having been scored from an offside position.

Germany’s first half-chance came in the 16th minute when Antonio Rudiger met a corner from the left, but the centre-back’s header was way off the target.

Gundogan had another chance in the 28th minute but he fired one into the arms of the Japan goalkeeper.

The Manchester City midfielder was presented with another chance moment after but he had his goal-bound strike blocked as the Germans ppiled pressure on their opponent.

Hansi Flick’s side got a lifeline when they were awarded a penalty in the 31st minute.

David Raum was hauled to the ground by Shuichi Gonda and Gundogan stepped forward to put his team ahead in the 33rd minute with a calmly taken penalty kick.

Joshua Kimmich and Jamal Musiala tried to double Germany’s lead before the break but the Japanese did well not to allow in another goal.

Germany got off to a bright start after the break as Gnabry struck over the Japan crossbar after smart work from Thomas Muller.

Musiala also had a fair attempt in the 51st minute after showing brilliant feet inside the box.

Germany kept on the chase for a second goal but were denied by excellent goalkeeping from Gonda who denied Gnabry on at least two occasions.

After holding off the Germans, Japan levelled the scores in the 75th minute when Doan fired home from close range after Neuer could only palm a low cross into the penalty box.

Hajime Moriyasu’s side then scored a second in the 83rd minute, with Asano scoring the all-important goal.

Germany threw all they had to at least pull level, but all their efforts proved futile

They are now in a difficult position as they face a must-win game against Spain.

For Japan, they would fancy their chance of reaching the knockout round of the competition for the fourth time with another win in their second group game.