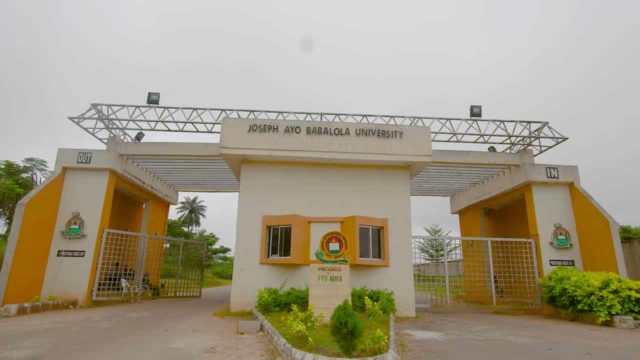 The Vice Chancellor (VC) of Joseph Ayo Babalola University (JABU), Ikeji-Arakeji, Osun State, Professor Olasebikan Alade, has urged members of the staff of the institution to seize the opportunities that are inherent in winning grants.

According to Alade, exploring such a window will enormously improve the quality of research work and as well place the university for a better rating.

The Vice Chancellor stated this, yesterday, during a press briefing to herald the 13th convocation for the 2021-2022 academic session of the institution.

While stressing that students of the institution were also being encouraged to focus on research, he disclosed that a soft loan programme through an entrepreneurial festival had also been established.

Prof. Alade, who reeled out the activities lined up for the convocation, revealed that a total of 481 graduands will be conferred with first degree.

He said: “There would be a total of 88 postgraduate students that would graduate, while six of them would be given PhD certificates.”

“We are bestowing our honorary doctorate degrees on three eminent personalities who have highly distinguished themselves in their respective vocations and services to humanity.

“They are: Sen. Michael Opeyemi Bamidele, a human rights activist and politician; Elder Aderemi Olowookere, the Chairman of the Christy Caleb Foundation, a frontline entrepreneur and an astute philanthropist with a passion for advancing work in health, education, and poverty alleviation.

“And Dr. Boboye Olayemi Opeyemi, the immediate past Corps Marshal and Chief Executive of the Federal Road Safety Corps (FRSC): “He is a fulfilled public servant, a serial medalist, and also a philanthropist with a passion for excellence.”

Fakolujo, who described the university’s tuition as reasonable compared to other private universities in the country, said JABU is passionate about producing graduates that perform excellently in life.

“One of such excellent performances was recorded by one of our law graduates, who passed out with first-class honours during the just-concluded 2021–2022 academic session of the Nigerian Law School.

“This and many more notable feats keep attracting the interest of many prospective students desirous of studying at our university.

“I am pleased to tell you that a 400-level student of the Department of Entrepreneurship, Samuel Ayomide Jesuyan, was appointed West Africa Youth Ambassador due to his laudable antecedents of dedication, hard work, and diligence in service to humanity.

“He is an advocate and relentless crusader for promoting entrepreneurship for African youths.” “The award is the Nelson Mandela Leadership Award of Excellence and Integrity,” he said.

Fakolujo enumerated some major achievements by the university in the last academic year, adding that the university’s stakeholders had not rested on their oars in ensuring that JABU attained its desired aims and objectives.

“It’s worthy of note that during the year under review, JABU ranked 3rd best among the private universities in Nigeria in the last webometric ranking of universities.”