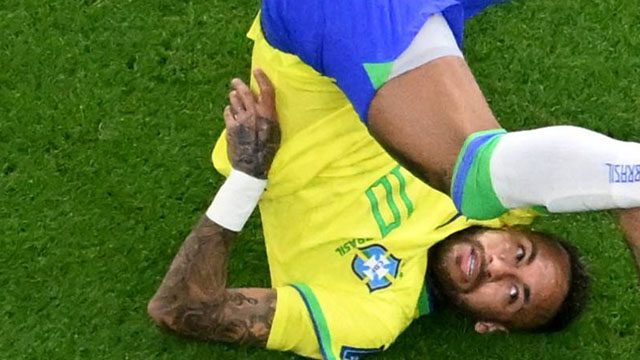 Brazil is confident that Neymar will return to lead their bid to win a sixth World Cup despite the world’s most expensive player suffering an ankle injury in their opening match in Qatar.

The Brazil captain came off late on in Thursday’s 2-0 win over Serbia with what was later diagnosed as a sprained ankle and has since been ruled out of their second Group G outing against Switzerland on Monday.

Doubts have even been raised in some quarters that he might struggle to feature again at the tournament, which finishes with the final in Doha on December 18.

But defender Marquinhos, who is also a teammate of the forward at Paris Saint-Germain, said Neymar has since been spending his days undergoing intensive physiotherapy in an attempt to recover to full fitness as soon as possible.

“At the time it was difficult for him and after the game, he was sad which I think is normal given how much he has dreamt of this,” centre-back Marquinhos said at a press conference in the Qatari capital on Sunday.

“Now, after the tests and the treatment, he is doing physiotherapy 24 hours a day which shows how much he wants to be back with us.

“We don’t know when, but we hope it’s as soon as possible.”

Brazil coach Tite insisted in the immediate aftermath of the win over Serbia that the 30-year-old Neymar would definitely play again at the tournament, but this time he was rather more measured when pressed on the subject of the superstar’s fitness, as well as that of right-back Danilo.

“I believe that Neymar and Danilo are going to play again at this World Cup. I do. But medically, clinically, I am in no position to say anything,” he admitted.

“I will keep doing so, not just for Neymar but also Danilo. I believe we are going to be able to use them again.”

A Brazil win against Switzerland at Doha’s Stadium 974 could be enough for them to secure a place in the last 16 with one group game to spare, depending on the result of the earlier Group G match between Cameroon and Serbia.

They would then play a last-16 tie on either December 5 or 6.

– Dani Alves to play? –
Danilo, the 31-year-old Juventus full-back, also suffered an ankle injury against Serbia and is expected to be replaced against the Swiss by either Real Madrid’s Eder Militao or the 39-year-old Dani Alves.

Yet it is the injury to Neymar that dominates all the talk in Brazil, a country that has become used to hanging on the fitness of its creative inspiration at the World Cup.

In 2014 he suffered a fractured bone in his back as Brazil beat Colombia in the quarter-finals and so missed the semi-final as the host nation went down 7-1 to Germany.

Four years ago he had to race to be fit in time for the World Cup in Russia and his impact on the tournament was limited as the Selecao lost in the quarter-finals to Belgium.

This time he is the leader of a Brazil side that is nevertheless packed with quality in attack and who won their opening game thanks to a brace from the Tottenham Hostpur forward Richarlison.

“Obviously we wanted to have Neymar and Danilo. The coach wanted all 26 players available for the World Cup. But we are ready and confident that we can show how strong the squad is, that we are well trained and ready for whatever the tournament throws at us,” said Marquinhos.

“In a World Cup, the team that starts the tournament is not always the team that finishes it, because of injuries or because some are playing better than others.

“Everyone has an important role to play.”