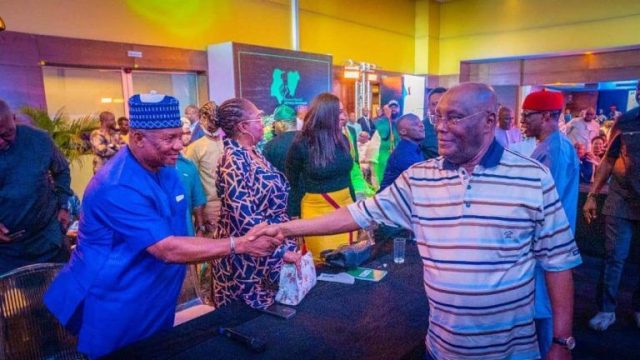 Atiku Abubakar, the PDP presidential candidate, on Saturday promised to increase funds for the arts and liberalise the process of their acquisition once elected in the forthcoming elections.

Atiku made the promise during a special roundtable discussion with Nigeria’s creative, cultural, and innovative industry stakeholders in Lagos.

The presidential candidate acknowledged that the creative industry was a vital industry capable of immense wealth creation and generating huge employment opportunities.

He said such an industry should not be toyed with, as it had been identified as the second most important sector after agriculture.

“I commend the presentations so far. I understand your challenges, which I am also facing because I own a television and radio station, I face the same problem of access to water and electricity as well as bad roads, so I want you to regard me as one of you.

“The way forward is to increase funds for the arts and liberalise the process of acquiring those funds. If you give me the opportunity, I will do it because it is essential.

“I reject direct CBN intervention and encourage the private sector to be part of this, government cannot develop all the funds needed.

“I look forward to a close collaboration with you on how we can develop the sector and exploit the potential, it is a multi-billion income-creating sector.

“If we work together, we can make it, I look forward to another meeting before the elections to agree on some modalities on how things will be done,” he said.

Atiku commended the patriotic zeal of the private practitioners in the creative sector in the face of numerous obstacles trying to hinder their progress.

Also, Ifeanyi Okowa, PDP vice presidential candidate, said all requests made by the practitioners in the creative sector would be properly articulated just as promised by Abubakar.

Okowa disclosed that the newly built Film Village in Asaba would be launched by December.

He said there were plans to ensure that practitioners in the creative industry ran it, as the government would not be in the best position to do that.

He urged Nigerians to turn out en mass to vote during the forthcoming elections in February.

“There would be a new Nigeria if we work together to defend our land and take pride in it.

“We can make Nigeria work again through collaboration with the aim to rebuild the foundation,” he said.

He said less than 10 per cent of music consumers paid royalties which is not encouraging.

Omorogbe noted that it was high time politics and governance were balanced while the right people were engaged in leadership positions in the creative space.

According to him, the Nigerian music industry remains so huge but is yet to be properly tapped.

Ayo Animashaun, the executive producer of Hip TV, noted that the enabling environment for the creative industry must be created for businesses to thrive.

“We do not have the enabling environment to perform at the best capacity; this makes it so difficult to carry out major projects,” he said.

Kenneth Gyang, a filmmaker, said that if the industry must function optimally, the incoming president needed to create a national endowment fund for practitioners in the creative space just as practised in other climes.

Gyang noted that Nigerian filmmakers were supposed to be given the opportunity by the government to engage in co-productions and sign treaties with other countries.

“If fund is created for filmmakers, it will enable us to tell our stories as a country in the most dignifying way,” he said.

She said training and capacity building should be prioritised and upscaled.

“We should have exhibition platforms beyond the likes of Netflix and Amazon, we should have more film festivals to also woo tourists,” she said.

According to Agatha Amata, the entertainment industry is still a goldmine waiting to be tapped. We need to go digital, a lot of resources go into digital development since 2015 but it is unfortunate, we are still where we are.

Also, Francis Onoche, a filmmaker, said that serious attention should be drawn to the cultural policy of Nigerian films, which he described as amazing.

Onoche said that endowment funds for the arts should be revisited and provided.

He commended the efforts of former Nigerian President, Goodluck Jonathan, for the support of training, distribution, production and capacity building for filmmakers.

“We need you to support the true emergence of the creative sector in Nigeria,” he said.

Injustice in PDP made me support Tinubu – Nnamani